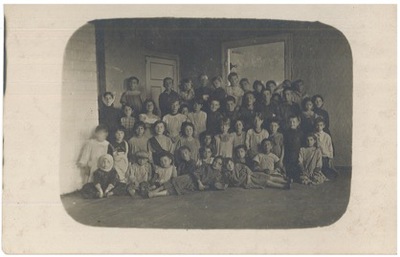 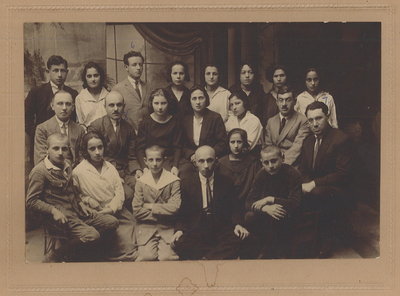 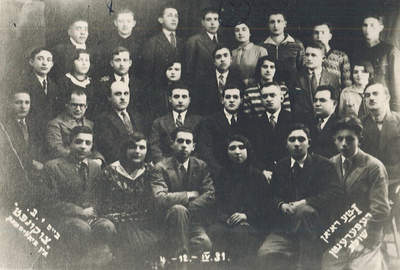 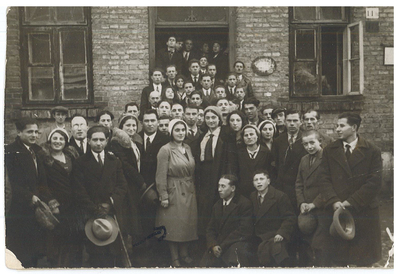 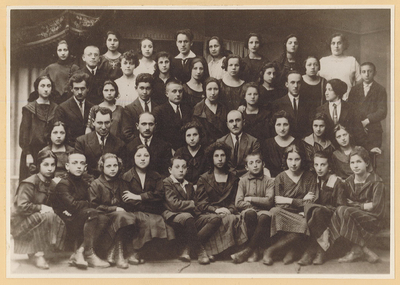 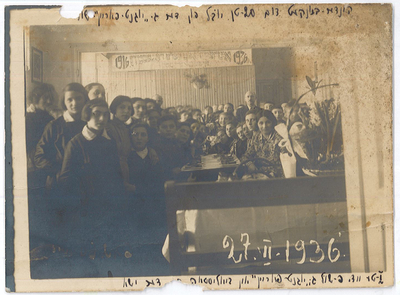 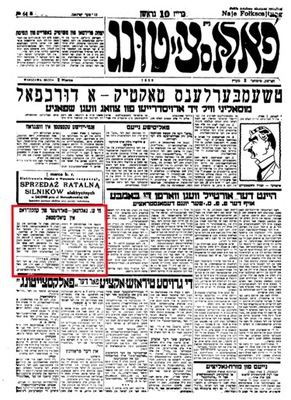 Front page of the Bundist daily, Naye folkstsaytung from March 2, 1938, with article announcing Goldman’s election to the chair of the Jewish Community Council. [YIVO Archives]

If there was one thing that Shaul Goldman was dedicated to, it was the well-being and education of Jewish children, a trait he seems to have inherited from his parents. Born into a poor family on Varshavska Street in Bialystok in 1894, his parents made sure that he not only received a traditional Jewish education in heder, but that he also attended gymnasia through the eighth grade, which was no easy task for the financially strapped family. The Goldmans made great efforts not only to educate their children – Shaul had two sisters – but to give the impression that they were not in need, even though they actually were.

From an early age, Shaul was interested in Jewish and general social issues and was drawn into practical work in connection to these matters. In the aftermath of the outbreak of the First World War, numerous refugees arrived in Bialystok. Shaul helped organize a youth committee to help the victims of the war. One of their first projects, which took place in 1916, in the midst of the war, was to build an orphanage and soup kitchen for the many homeless children who had arrived in the city.

During the German occupation of Poland, 1915-1918, he distinguished himself as a young teacher and activist. The Yugnt fareyn, the youth committee Shaul helped found, became a formal organization - a national, radical organization that would create the first Jewish secular school in Bialystok.

As both a teacher in and director of the school, Shaul Goldman was integrally involved in its work and in the development of other schools as well. If something was connected to the growing system of Yiddish schools in Bialystok, Goldman was involved in it. After the First World War ended and Poland gained its independence, he became a central figure in Tsisho - the Tsentral yidishe shule organizatsiye (Central Yiddish School Organization), the secular school system run by the Bund and Poale-tsien (Left Labor Zionism). He is considered one of the pioneers in the creation of Jewish secular school systems in Poland.

“Capable, dedicated, and idealistic” is how Yankev Pat, a well-known Yiddish pedagogue, described Shaul Goldman. His main interests, according to Pat, were orphanages, soup kitchens for children, and Yiddish schools - his dedication to which knew no bounds. As Goldman’s activities increased, his interests also widened, leading him to become involved in adult education, courses for laborers, libraries, and the dissemination of Yiddish books. He performed these duties with a rare dedication and even stubbornness. According to Pat, the desire to help the common man was in his blood.

In Bialystok, the battle for workers’ rights and even for a piece of bread had been building since the late 19th century. With a population that was 75% Jewish, most of which was working class, the Bund had become an organization of significance. With his dedication to the welfare of others and his concern for their fates, the workers of Bialystok found in Goldman both a brother and a guide. The 24 hours of his day were divided between work for the Yiddish schools, the libraries that served Bialystok’s readers, the unions, and political activities.

Each year the school he started in Yeshaye Visotski’s house, on 13 Branitska Street across from the city gardens, produced a new crop of dozens of well-educated Jewish students. Goldman was able to see the 15 graduating classes that were the fruits of his labors. Thanks to his help and hard work, other schools in Bialystok – The Mendele School, The Peretz School, The Grosser School, the Yiddish Gymnasium, together educated thousands of Jewish students. And also, thanks to him, orphanages that cared for the children of the desperately poor and homeless flourished in Bialystok.

Shaul Goldman also witnessed the incredible growth of the Jewish labor movement and the professional unions. He became a leader of the Bund, the Jewish workers’ movement, but also a city council member and member of the Jewish Community Council. The Sholem Aleichem Library, which he helped found, grew to hold a collection of 50,000 books and which drew thousands of patrons under his watch. To say that Goldman was a central figure in the development of Jewish education in Bialystok would be a massive understatement.

When World War II broke out and the Soviet army occupied Bialystok, Goldman and other Bundist leaders left the city. Although he was an opponent of communism, he returned, mainly because he didn’t want to leave his wife and two sons alone. Perhaps, he thought, it would be possible to get along with the Soviets. Perhaps he could again begin to teach in the now Soviet-run Yiddish schools. But, as his wife Esther explained, he, along with other Bundist leaders were called in to meet with the Soviet commander of Bialystok, who was ostensibly friendly to them, forced the Bundists to sign declarations of regret for their “counterrevolutionary” and “traitorous” activities. This was the beginning of the end. According to Yankev Pat, Goldman was a problem for the Soviet occupiers in Bialystok. He was too well-known, too trusted, too beloved by the city’s working class Jews. The Soviets had planned to remain in the city, and with such a large population of Jewish socialists – Bundists – who considered Goldman to be their leader, they had to get rid of him.

A terrible period was about to ensue. Arrests had begun to be made. Goldman was taken by the Soviet Secret Police on October 2, 1939 and held in the Bialystok prison until May 1940. Esther Goldman explained that she was able to occasionally bring him packages of clean clothing until, when she arrived at the prison on May 13, 1940 with a package of clothing for Shaul and was told by a prison guard that he had been taken away. No trace of him was ever seen again. In order to discredit both him and the Bund, Soviet agents spread nasty rumors.

A comrade who had been released from the same prison described to Esther how it had been for Shaul in prison. He told her that his audacious character served as a model for all, in spite of the fact that he was mentally tortured by their captors. At night, he became a kind of “attraction” for the Soviets, who forced him to describe what the Bund was. He would return to the cell completely exhausted, but he refused to give in. He told us that he had been sentenced to 10 years in a labor camp and that if he worked well, his family could be brought to him. He left it up to me to decide what to do and only asked that I raise the children in a socialist spirit.

On May 20, 1941, Esther and her two children were to be transported to Siberia. The night before, her older son – a seven year old – ran away. In the short time she had to pack, no one was able to find him. Soviet guards threw Esther, her younger son, and Shaul’s sister Beyle into a car and took them away. The older son, who, together with Shaul’s sister Golde – also a teacher - found his way to the home of Esther’s parents, where they lived until the Bialystok ghetto was liquidated and then were sent to Majdanek, where they were killed.

Only after the war did Yankev Pat, Goldman’s comrade in both the Bund and Yiddish pedagogy, receive a letter – postmarked Montevideo, Uruguay - that described the last days of Shaul Goldman. The writer, who wrote that he was brought to the Bialystok Prison by the Soviets at the end of 1939 and placed in cell number 21:

“I entered the cell and saw comrade Shaul Goldman, alavhasholem, who I knew well from our years together at Aleksandrov’s Gymnasium. Comrade Khatskl Anyekhovitsh was in the same cell. He shared a board with Shaul Goldman.”

According to the letter, Goldman knew what awaited him. “He was calm. He knew what the bloody authorities were preparing for him. What did cause him to suffer was the fate of his dear wife and two children. Having shared the board with Khatskl, he spoke to him a great deal during his last hours.”

One dark night, an officer game and removed Shaul Goldman from the cell. He had a feeling that his end was near, but he was calm. He told Khatskl, that if he survives, he should remember his wife and children. That was his last night in prison. The writer of letter replaced Goldman on the board next to Khatskl. Three nights later, Khatskl was taken away, just as Goldman had been.

As is evident, Shaul Goldman was a central figure in the life of Jewish Bialystok. A communal leader and educator, he was a driving force behind the creation of Yiddish schools and libraries, and served as a guide for the Jewish poor and working class as well.