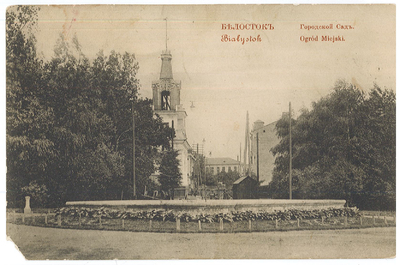 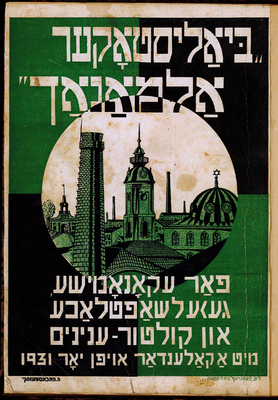 Cover of the Bialistoker almanakh, an annual almanach of economic, societal, and cultural issues. 1931. This annual contains dozens of fascinating articles all about Bialystok's current economic, political, educational, and cultural situation.

One of the most vibrant Jewish cities in Eastern Europe before World War II, the city of Bialystok played an integral role in Jewish life in eastern Europe. Historically in the shadow of larger cities like Warsaw and Vilna, Bialystok was nonetheless a vibrant city, with Jewish population at the turn of the twentieth century that was a remarkable 75% of a total population of approximately 65,000. Unusual in this regard for such a large city, Bialystok’s Jewish majority created the foundation for a uniquely Jewish cultural metropolis. The nature of the city’s Jewishness was not simply a matter of population, but a cultural phenomenon that manifested itself in a variety of ways.

At the beginning of the nineteenth century, Bialystok was little more than a Polish backwater with a small number of Jewish residents. But with the subsequent advent of the railroad and industrialization, it’s population burgeoned. With a growing textile industry, migrants flooded the city, and changed its character. These migrants, the vast majority of them Jewish, provided the vast majority of the city’s labor force. Not only were most of the city’s workers Jews, but the factory and mill owners were as well. Statistics indicate that at least 90% of Bialystok’s factories were owned by Jewish proprietors and that at least 80% of their laborers were Jewish as well.

It is thus not without coincidence did Bialystok become a center for the Jewish labor movement. As industry there grew, so did revolutionary ferment. Bialystok is home to what is considered to be the first ever strike by Jewish workers, when, in 1882, weavers staged a walk-out to demand higher wages. The city became a hotbed of Jewish revolutionary activity and, eventually, a center for the Socialist Bund, which used Bialystok as their center of operations after the organization’s leaders were exiled from Vilna just after the turn of the twentieth century. The Bund was such a central feature of Jewish political life in Bialystok, that the city had its own Bundist newspaper, Der bialystoker arbayter (The Bialystok Worker).

Although a major player, the Bund was just one of many Jewish political parties active in Bialystok. Zionist parties of left, right, and center, the Folkspartey, and a number of religious parties competed for seats on the city council, as well as the Kehila, the Jewish community council. It was from these parties that Jewish communal leaders arose to guide Bialystok through a variety of different national governments, attacks and pogroms, and periods of difficulty and privation.

Whether the city was under Russian rule, as it was through much of its expansive growth during the nineteenth century, or under Polish governance, Bialystok was still very much a Jewish city, whose citizens had specific religious and cultural needs. With a new urban population came needs for housing, schools, media, restaurants, theaters, entertainment, among many other aspects of life that urban dwellers require. The people of Bialystok created and supported numerous mutual aid societies, a variety of different kinds of Jewish schools, a varied periodical press, and a number of different forms of entertainment, Yiddish theater among them.

Until its destruction in the Holocaust, Bialystok functioned as a vibrant Jewish metropolis. Thanks to its strong Jewish majority, it stands unique among the cities of Eastern Europe, having created an environment in which Jewish culture and identity flourished.